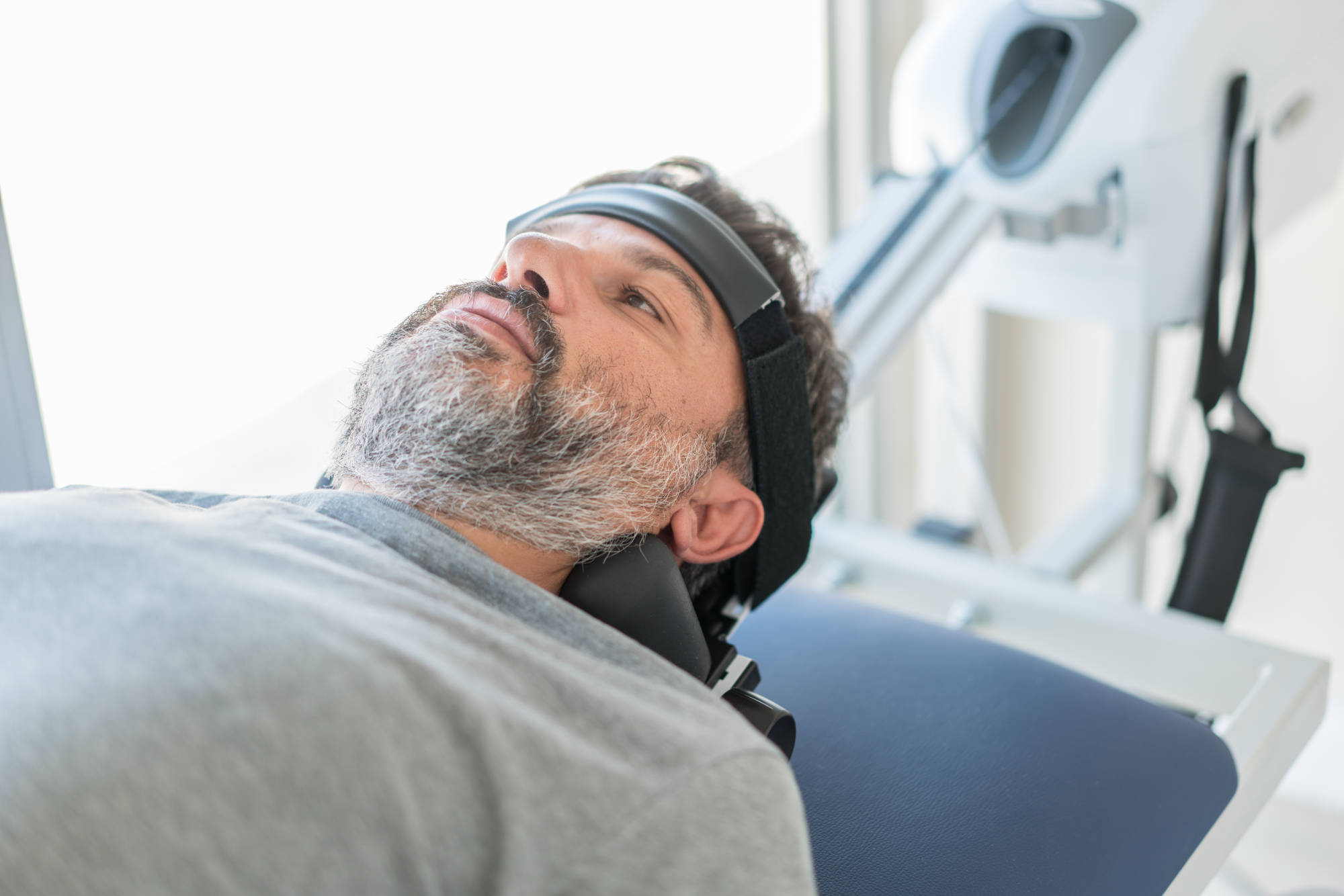 Chronic neck pain is a common ailment that can arise from injuries and other underlying conditions. In 2014, it was estimated that the annual healthcare burden of neck and back pain was upwards of 315 billion USD.[1] Cervical traction therapy is a common technique used by both physical therapists and chiropractors for reducing chronic neck pain and improving range of motion. Depending on both patient and therapist preference, neck traction can be performed either continuously or intermittently with small breaks for rest in between. The practice is typically supplemented by other therapeutic techniques, such as deep tissue massage or electrical stimulation.

Cervical traction uses either weights or pulleys to gently stretch the head away from the body, therefore relieving tension in neck muscles and gently separating the vertebrae. Neck support during traction has been shown to lessen tension in the posterior annulus fibers and ligaments at the C4-C6 levels. It is therefore recommended to include neck support in clinical practice to avoid further injury and aid soft tissue protection.[2] Research has not yet identified the specific mechanism by which neck traction therapy is effective, however it is generally believed to work by easing pressure on the intervertebral discs.

Though traction therapy is safe for most patients, patients with vascular problems in the neck are at a higher risk for experiencing complications. No pain should be experienced at any point throughout or after the procedure.

The majority of research on the effectiveness of neck traction therapy has been within the past five years. A 2017 meta-analysis showed significantly decreased pain immediately after treatment in patients who underwent cervical traction as compared to placebo.[3] The research on long-term effects and changes in neck disability index scores is more contentious. Studies and meta-analyses generally show a subtle long-term improvement in neck pain and function; however, whether or not this improvement can be considered significant varies.[4],[5] Research suggests that traction therapy should instead be used to complement and enhance the effects of other established therapeutic techniques, such as neural mobilization or transcutaneous electrical nerve stimulation.[6]

[1] Low Back and Neck Pain [Online]. BMUS: The Burden of Musculoskeletal Diseases in the United States. https://www.boneandjointburden.org/fourth-edition/iia0/low-back-and-neck-pain [21 Sep. 2020].

[5] Fritz JM, Thackeray A, Brennan GP, Childs JD. Exercise Only, Exercise With Mechanical Traction, or Exercise With Over-Door Traction for Patients With Cervical Radiculopathy, With or Without Consideration of Status on a Previously Described Subgrouping Rule: A Randomized Clinical Trial. Journal of Orthopaedic & Sports Physical Therapy 44: 45–57, 2014.